THE BLADED HAND is a documentary on the global impact of the Filipino Martial Arts (FMA), also known locally as “Arnis” or “Eskrima”, or around the world as “Kali”.

Arnis is an indigenous martial art with uncertain origins, although some researchers have found traces of 17th Century Spanish Fencing influence in some styles. Though originally a blade fighting art, it is now more popularly perceived as a stick fighting system, and many styles apply sword techniques to their stick use. 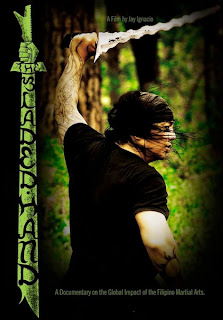 The film is an exposé on the FMA as a global phenomenon, which, for at least 30 years now, has been considered the most effective weapon-based fighting system by both Military and Law Enforcement systems.

FMA was first introduced to Hollywood in 1973 by Bruce Lee in the film “Enter The Dragon”, after he had learned it from Dan Inosanto. FMA has also been the martial art of choice for Hollywood’s top fight choreographers such as Jeff Imada (The Bourne Identity, The Bourne Supremacy, The Bourne Ultimatum, The Book of Eli, Lethal Weapon), Robert Alonzo (Mission: Impossible 3) and Jon Eusebio (The Bourne Legacy).

Despite FMA’s success around the world, it has been neglected, and even forgotten in the Philippines. FMA seminars are conducted regularly around the USA, Canada, Australia, and Europe, where Filipino Masters are in demand. The Philippine Government formally recognized Arnis as the country’s own martial art by way of the Arnis Law or Republic Act 9850, declaring Arnis, Kali or Eskrima as the National Sport and Martial Art.

FMA is most probably our country’s greatest cultural export, and we Filipinos don’t even know it.

Posted by Lambert Parong at 1:19 AM